Happy Monday. Hats off to all who have run this race before us.

“A day seared in memories.” 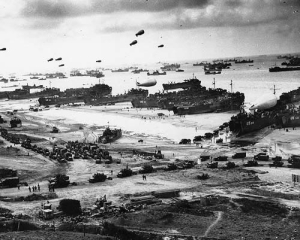 So said my daily paper a few days ago.

Of course, it was referring to the seventieth anniversary of D-Day, a day to honor very young, ordinary men, yet giants!

They were those who braved through blood-tinged waters, climbed rocky cliffs, or fell from planes, staring down death, or actually dying.

Whatever degree of comfort and peace we enjoy today is in part because of the thousands who died in one day.

However, their sacrifice changed the course of World War II.

Both trial and triumph became part of our history that day.

This race called life is much like that battle on that crucial day.

Someone has called it (life) a contest of stamina, endurance, faith, and not for the fainthearted.

Both battles and victories are written on the pages of our lives.

We must remember, however, that “no battle–no victory.”

Charles H. Spurgeon, another “giant” from yesteryear, said, “Many men owe the grandeur of their lives to their tremendous difficulties.”

Another great quote I found is this, “The strength of the ship can be demonstrated by the hurricane.”

Storms of life don’t necessarily “make” us who we are, but reveal who we are.

I love this writing from many years ago by former President Theodore Roosevelt.

“It is not the critic who counts,
nor the man who points out how the strong man stumbles,
or where the doer of deeds could have done better.
The credit belongs to the man
who is actually in the arena,
whose face is marred by dust and sweat and blood,
who strives valiantly,
who errs and comes short
because there is no effort without error and shortcomings,
who spends himself in a worthy cause,
who knows the end of achievement is in triumph,
who knows if he fails while daring
he will never be with those timid, cold souls
who never knew victory or defeat.“