Happy Monday. Did your team win?

Our attention has been on the Super Bowl, whether we really were interested or not.

Super Bowl parties have been planned, much hoop-la going on.

Two teams made up of the best in football have trained, worked, coveted the “title.”

And then there are the Olympics.

Young people who have given their lives to train for a special event to gain a gold medal.

It is admirable that they want to represent their country in the finest way.

However, let’s not become too enamored of some ordinary human beings and forget, they made the best of what they were given.

We, as God’s children, have the opportunity also to “go for the gold.” Yes, you. 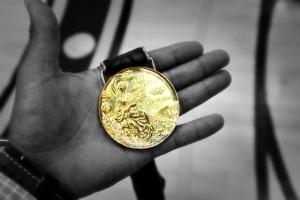 I laugh when I read the account in Judges 6:13 when God came to Gideon to call him as a leader of the Israelites.

The angel addressed him, “The Lord is with thee thou mighty man of valour.”

I can see Gideon looking around to see who was being called.

Then he began his argument.

“I am the least in the family.”

As I think of the group of Jesus’ closest followers on earth, they were a motley group. One couldn’t keep his foot out of his mouth.

But, oh, what they became–super heroes of the faith.

I’m so glad Jesus said, through Paul, “the foolishness of God is wiser than men.” 1 Corinthians 1:25

“Just ordinary people,
God uses ordinary people–
He chooses people just like me and you
Who are willing to do as He commands.
God uses people that will give Him all
No matter how small your all may seem to you
Because little becomes much
As you place it in the Master’s hand.”

Let’s go for the gold.