Because of extreme highs and lows in temperatures this winter, roads and cars are suffering.

I have a deep pot hole not too far from my home that I have had to drive over carefully.

I got to thinking, do we have “pot holes” in our lives? I think I have hit a few–like sneaky discouragement. 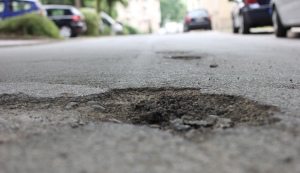 Because of fickle emotions, which have “highs” and then without warning, extreme “lows,” we can be knocked for a loop, as the saying goes.

Proverbs 25:28 says, “He that hath no rule over his own spirit is like a city that is broken down, and without walls”…leaving us with no protection against the enemy who wants to steal, kill, and destroy.

But as I study that verse from the book of wisdom, it indicates we do have the ability to control our emotions. In fact, self-control is part of the fruit of the Spirit.

A story that so depicts how we are capable of great victory then utter despair is Elijah, told in 1 Kings 18:25-41.

He was given the opportunity as God’s prophet to have the contest with hundreds of Baal’s prophets.

Through Elijah’s great courage and faith, God was the victor! What a high! Did it last? No.

Soon after, Baal’s follower, Jezebel, chased Elijah with the intent to kill him.

Then we find Elijah, courage completely gone, sitting under a juniper tree, asking God to kill him. Can you identify with him?

In thinking of God’s response to Elijah’s “down time,” it helps me to know how He sees our tendency to get discouraged.

Realizing Elijah’s exhaustion from the great battle with Baal, and his running from Jezebel, God sent an angel to care for his physical needs. God wasn’t mad at him.

I’m glad we are told God remembers that we are flesh, just dust. He was tempted in all areas as we are, but without sin, He understands our frailty.

You would probably say with me that life is mostly a smooth road of “highs.” But occasionally, a bumpy ride of discouragement hits.

The question comes in Psalms 43:5, “Why art thou cast down?”